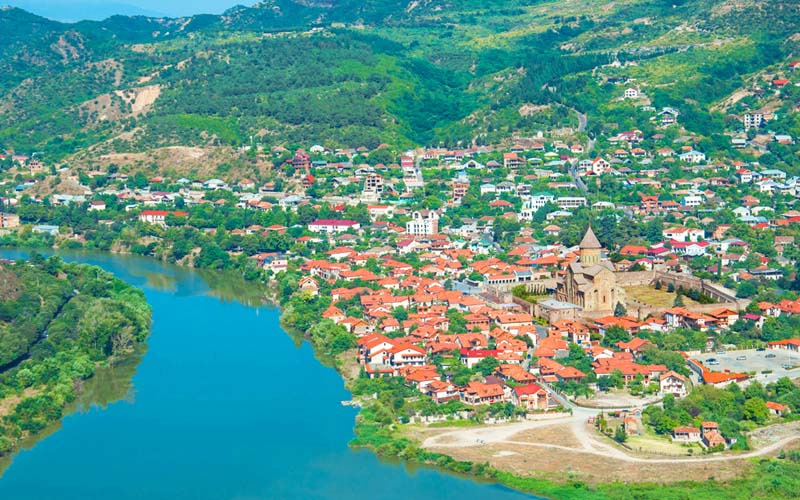 Group Tour to Uplistsikhe and Mtskheta

In this Georgia one-day tour you will visit a famous Uplistsikhe, one of the oldest urban settlements in Georgia, remarkable for its diverse structures dating from the Early Iron Age to the Late Middle Ages. Take a tour in Mtskheta – the ancient capital of Georgian kings to enjoy the amazing beauty of the architecture of such ancient monasteries as Jvari and Svetitskhoveli. Tour to Uplistsikhe and Mtskheta Tour to Uplistsikhe and Mtskheta

Our guide and driver will come to your hotel to pick you up at 9:00 am to start a tour to Uplistsikhe and Mtskheta

The tour begins with a visit to Jvari Church (6th -7th cc), the most important religious center and an architectural masterpiece of mediaeval Georgia. Enjoy breathtaking view from the church that towers over the city of Mtskheta. The name Jvari means “cross” in Georgian language. It explains the ancient legend which says that it was there that St. Nino of Kappadokia put the Sacred Cross symbolizing the acceptance of Christianity by Georgia. Later over the cross the Temple of the Sacred Cross was built. It is worth mentioning that Small Jvari temple was built first (lying in ruins next to the main temple), and Big Jvari was erected afterwards for the purpose of preservation of the Sacred Cross relic. According to the ancient records the Cross was open to be seen from afar and was the object of worship until the 6 th century.

In the very center of the town like a bright spot n the background of old structure stands a huge palace built in the original Gothic style. This is Stalin Memorial Museum which was constructed in the 1950s. The Museum stands around the house where on December 21, 1879 the great “Kremlin Highlander” was born into the family of shoemaker Vissarion Dzhugashvili. The house as a part of the Museum complex is a high-ceilinged stone structure. Stalin Museum is dedicated to all aspects of the well-known leader’s life. It consists of three sections displaying rare exhibits: the originals of letters and notes, photos, military annals, maps, schemes of battles, Stalin’s personal things – photos of his sons Jacob and Vasily, letters, the generalissimo’s uniform, the death mask. There are also the archives of the chief with his childhood and teenage verses. The separate hall has the collection of gifts to Stalin.

10 km from Gori on the bank of the river Kura there stands one of the rarest monuments in the world – the ancient fortified city Uplistsikhe cut inside the volcanic rocks of the Kvernaki ridge. It was first mentioned in the annals of the 1st century BC and prospered in the 9th -10th centuries. Even from afar this quaint rocky city looks bewitching. Looking like giant pores on the rocks gape the cave grottoes, which used to be full of life. Long time ago there were huge majestic halls, temples, dwellings connected by winding corridors of streets. It is hard to believe that this grandiose titanic creation of the whole city from stone was done by human hands.

In Mtskheta there is an active Samtavro convent (the 11 th century) in which the ruler Mirian and his wife Nana, the first to accept Christianity from St. Nino in 337, are buried. The convent was constructed in 1820 instead of a small ancient wooden church of the 4 th century erected by the king Mirian. Its dome and some of the parts were reconstructed after the earthquake in the 13 th – 14 th centuries with addition of the sanctuary screen. The three-storied bell tower was built in the 15 th – 16 th centuries. The frescos there are dated the 16 th – the 17 th centuries. In the 17 th century the convent was renovated for the last time. In the church yard there is the grave of St. Gabriel; one of the most esteemed Georgian saints. This place is always full of pilgrims and worshippers of the saint. In 1906 the monument to the king Mirian and queen Nana was built in the convent.

Visit the chamber of wine (Mtskheta)

With a mini-museum of traditional attire, cellar with Qvevris, wine saloon and large terrace with 360° view, Chamber of Georgian Wine is finest place to dine and experience 8000 year old winemaking traditions. Here you will have cuisine masterclass in making Georgian traditional meal Khinkali and wine tasting. After browsing the place you will have lunch.

Not far from Samtavro convent there is another cult monument of Christian Georgia – one of the major Orthodox Georgian temples – Svetitskhoveli Cathedral.It was built in the 11 th century (1010-1029) on the site of the Twelve Apostles Church, the first Christian Georgian church erected in the 4 th century. There is a religious legend, connected with this church origination, about Elioz, a citizen of Mtskheta, who found the Tunic of Jesus Christ in Jerusalem. Elioz’s sister – Sidonia – died as soon as she touched the tunic. She was buried wrapped in it . Soon a big tree, cedar of Lebanan, grew on Sidonia’s grave. When the ruler Mirian decided to build a temple on the place where the Tunic of the God was buried the cedar was cut down. They made seven columns from the tree and began to install them in the church. Six columns were in place but the seventh was not; it was hanging in mid-air. The Baptist of Georgia, St. Nino prayed all night long and then the column “without a touch of a human hand” froze on its place and … started shedding holy ointment. The miraculous chrism cured patients of heavy illnesses. Hence the temple’s name – Svetitskhoveli; in Georgian it means “the Life-Giving Pillar”. One of the greatest religious holidays of Georgia is Mtskhetoba-Svetitskhovloba is dedicated to the Life-Giving Pillar and the Tunic of the God. It is marked two times a year (on July13th and October 14th).

Transfer back to your hotel